Creativity is a key part of what I do here. I spend a lot of time thinking about what creativity is, about the conditions under which it flourishes, and about how to increase everyone’s capacity for creativity – both the things that I can do personally and directly by teaching, writing, and developing tools; and the things that we need to do as a society (to which I can contribute by raising awareness, profile, possibilities for research, and one day funds) so that everyone has the resources they need to put those tools to work.

This week I am absolutely delighted that the work I am doing has been given a fantastic shot in the arm. On Monday, I was honoured to win the Oxford University Humanities Innovation Challenge for my creativity and innovation tool Mycelium. The prize gives, most valuably of all, mentoring; but also a pot of start-up capital that is small but sufficient to get me to the first hurdle, a working prototype, and a series of events that will test it, and then access to the opportunity to pitch for sufficient funds to go from the results of those tests to a fully functioning and openly available product. 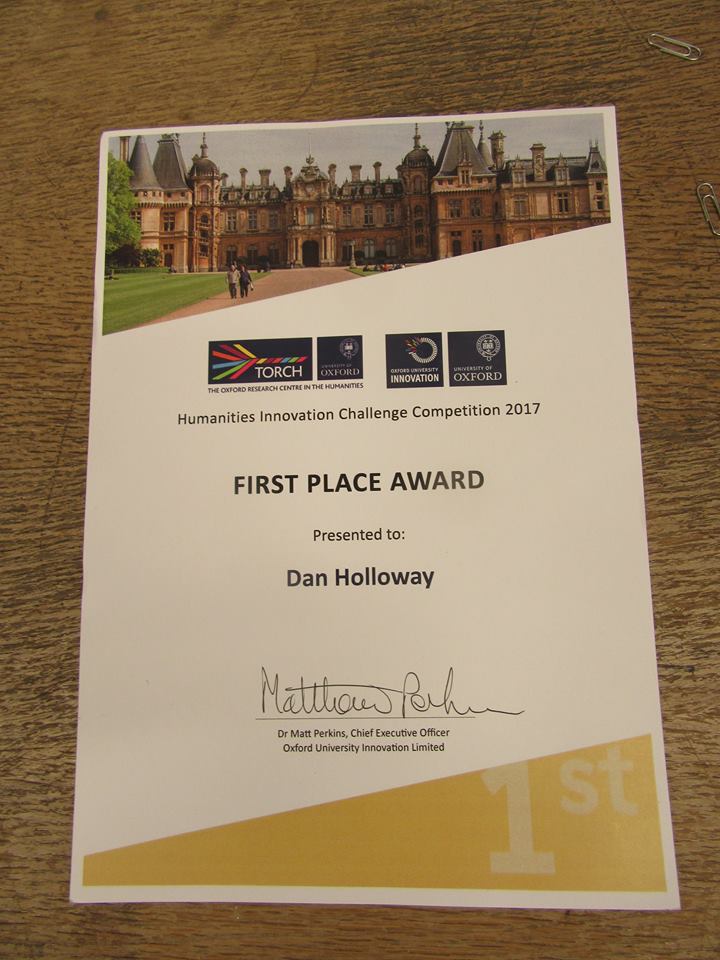 I will say more about Mycelium as we near the launch, but the long and the short of it is this:

As much as the award, I was encouraged by the feedback, both on the night and since. First of all, the competition attracted 20 entries from across the Humanities, many of them put together by senior academics, so for me whose day job while I build this place is in administration to have the work I am doing recognised means a lot. And the entries of my fellow finalists were brilliant, from an app to help with the recovery process from anorexia that is based on listening to people with lived experience rather than assumptions about what they must need to an affordable way to use touch and audio to make art available to blind people – again developed with people who would use it and not by people making assumptions. With such incredible, and socially significant, work as that in the final, I feel a certain weight of expectation to make sure that Mycelium becomes more than just a training tool for management (though it very much is that and serves a useful purpose as such).

What was most encouraging was the feedback I had about the scope for Mycelium. Over the course of the evening it became clear that the judges, and the various other investor types who were invited along, saw a wide range of groups of people for whom this would make a genuine difference to their lives – which is, of course, the reason I am doing it. I have always had the tendency to think of my creativity as an amusing thing I do on the side, largely as a result of spending my formative years in an education system that really didn’t like anyone who was different, of being constantly told by pretty much every “person who should know” that “that’s nice, now think about proper things” or “nice hobby but don’t talk about it in public”.

It takes a lot to overcome that. I know, cerebrally, that bringing creative and innovative skills to people is a critical part of empowering people to imagine different and better futures, but having the reinforcement of someone telling you you’ve not got it all wrong matters when it comes to actually believing it, believing it in a way that means you will give it the effort and attention you need to make it a reality.

So, thank you, Oxford University Innovation. And, as I said at the close of my pitch, “let’s build better dreams together.”

I will be holding a series of beta sessions through July, August, and September in Oxford and London. If you would be interested in participating, or just being kept up to date with the project, please email rogueinterrobang@gmail.com with “mycelium” in the subject line.

View all posts by danholloway